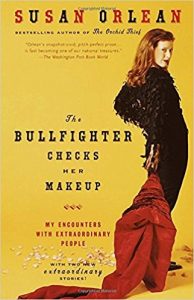 Tiny Masters
The notion of tiny masters comes from author and  New Yorker  writer Susan Orlean, who once explained that she’s most interested in writing about people who are masters of their “tiny domains.' Adapting her approach to personal essays can help writers discover a rich subject near at hand — something they already know a lot about, something that interests them. It helps shift the focus from writing exclusively about the self to writing about knowledge, ideas and processes. As writers explore their mastery on the page, they instinctively begin playing with structure and making connections they never knew existed. Meaning begins emerging naturally from their drafts, pointing the way to future revisions.

This is how it works:

* Make a list of 10 things of which you’re a master. Include talents, skills, hobbies, qualities of character. I've created many lists over the years, and they surprise me every time: Making enchilada sauce. Building fires. Finding beach glass. Crossing rivers. Writing thank you notes. Collecting maps. Procrastinating. Teaching tricks to my dogs.

* Choose a mastery that appeals and free-write about it. Describe how to do it, when you learned it, what you accomplish, where you do it — whatever comes to mind.

* Now write about a person connected with this mastery. Maybe it’s the person who taught you how to do it, someone you’ve done it for, or someone who discouraged you from doing it. Include details that capture the person’s personality or mannerisms.

* Next, write about a particular scene or event that involves your mastery and/or your person. Look for opportunities to add dialogue and setting.